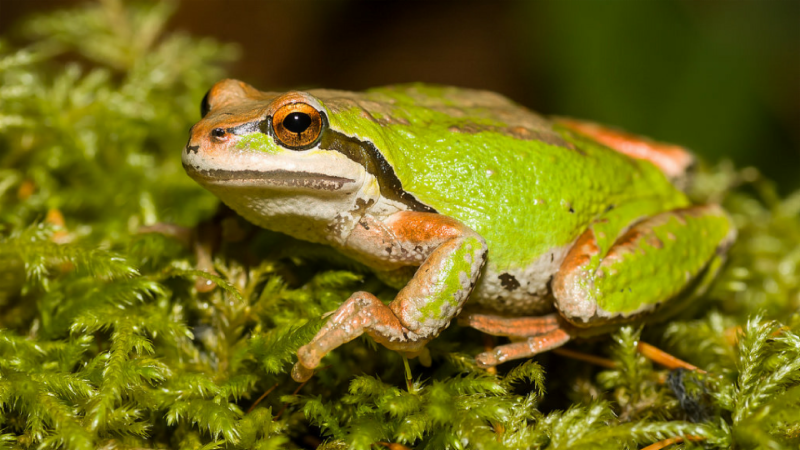 Here at the Nature Preserve, summer means listening to the Pacific Chorus Frogs sing in the evening as we pack up for the day. Also known as the Pacific Tree Frog, these amphibians have a reputation for being some of the loudest singers in Washington’s forests. In fact, the pacific chorus frog’s song is often featured in Hollywood films – listen for a cameo the next time you’re watching a jungle movie.
Just as distinctive as the voice of this frog is its color changing prowess. Pacific chorus frogs change tone from green to brown depending on the amount of light hitting their skin. One common misconception imagines these frogs “changing color to match the background”; but in reality, they change based off of the lighting conditions in their environment. One frog can be green, brown, or a mixture of both depending on the amount of light reaching it! In our cloudy and overcast climate, this is a useful tool that helps this frog hide from predators.
This native frog species even produces a blue coloration! Very rare and only documented a handful of times, the blue coloration is the result of defective yellow color cells. Typical, green frogs appear green because of a combination of grey and yellow pigment in their skin. The blue frogs lack the yellow pigment – making them appear blue to human eyes. The last blue chorus frog was documented in 2008, but who knows what SHADOW volunteers will discover while monitoring the amphibian pond.
Want to learn more about this topic?