Masked and slinking through the night, racoons are often considered a wily bandit of North American mammals. This nocturnal predator is an incredibly adaptable and has found a home in the urban environment. Native to North America, racoons are found across the US and are only absent in the Rocky Mountains. In the wild, they live in tree cavities and hunt for amphibians, reptiles, and small rodents. Racoons are notorious as omnivore generalists- they will eat almost anything. This helps them fit well into both wild and urban environments. Active at night, their characteristic mask is thought to help them see in the dark, the black markings attract and absorb light. Racoons are waddlers, like bears, and their tracks are easily identifiable by their 5-toed, waddling gate.

Although racoons were often thought to “wash” their food, the Latin name means “doglike washer”, biologists now know that racoons extremely sensitive fore paws (front) are even more sensitive underwater. Thus, racoons will dip food and objects underwater to examine them with their extremely dexterous fingers. The water increases their sensitivity and helps them determine more information about what they are holding or eating. Racoons receive 2/3 of their sensory data from touch- as an omnivore, when anything can be food, careful examination is key. 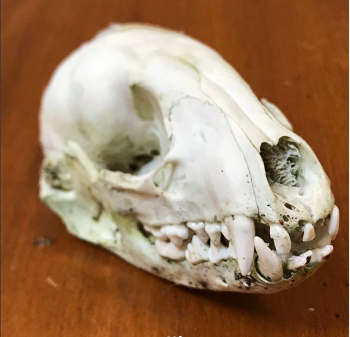 Although they can often be spotted in our backyards, Procyon lotor also make their home at the Nature Preserve.  Recently, while on a monitoring field day, staff found a racoon skull (pictured) near the lake and far from humans. More than just a wily bandit, racoons are well-adapted and interesting North American mammals.

Northern Woodlands: Racoons- It’s All in the Hands