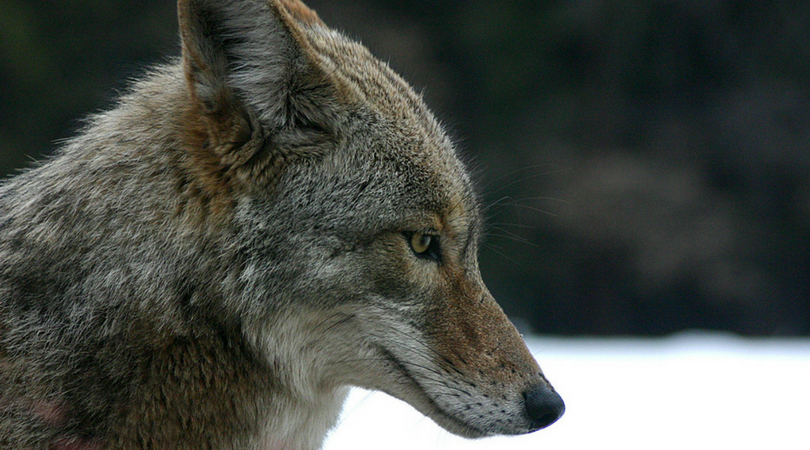 Wily coyote is a familiar figure in American folklore. He’s a clever trickster – often mischievous and always seeking personal gain. Real-life coyotes also have a bad reputation – infamous for stealing chickens, house cats, and anything else they can get their teeth around. However, while coyotes are opportunistic predators, and practical measures should be taken to prevent pet predation, most members of the public are grossly misinformed about the coyote’s role in our local ecology.

Once limited to the brush and prairies west of the Great Plains, this highly adaptive animal has expanded its territory along with European settlement. Although nearly every other native species diminished as settlers arrived, the coyote flourished. Why? The answer lies in their adaptive behavior and inquisitive nature. Coyotes are renowned as generalists – meaning, they can thrive on a variety of food sources, find dens in diverse locations, and survive in nearly any circumstance.

Increased human activity has often meant dramatic changes for wildlife. Bobcats, cougars, black bear, and wolves have all been strong-armed into the margins by population growth. Meanwhile, coyote populations have surged to fill that void. The large coyote presence in our modern, urban areas is a powerful statement about both the adaptive nature of this animal and the intense pressure human activity has placed on the coyote’s natural predators.

Coyotes and humans once shared the North American west. To many indigenous peoples, the coyote was an important cultural figure. Coyotes are a uniquely North American animal and have existed here for millions of years, becoming incorporated into the cultures, religions, and symbology of most native peoples west of the Great Plains.

Rapidly arriving European settlers, however, had a different view, one that still influences us today. Popular literature in the 1870s portrayed coyotes as cowardly, slinky, disease-ridden and malicious. Popular opinion also held that coyotes harassed livestock populations, even though no studies had been done on coyote biology.

By the 1930s, a campaign was begun to exterminate coyotes from the North American West. In less than 10 years (from 1947 to 1956) the ominously named “Eradication Methods Laboratory”, funded by the US government, killed over 6.5 million coyotes through poisoning and shooting. It was only decades later, when studies had been conducted on coyote diets, that we learned coyotes eat mostly small mammals like rabbits and mice in addition to fruit, vegetables, and carrion – largely avoiding most livestock populations. To date, this is the most vicious eradication effort levied against any North American wildlife.

As the pressure ratchetted up on coyotes, this “jack of all trades” rose to the challenge. The coyote’s adaptive behavior and biology helped it survive this onslaught. Two main factors helped this animal continue to flourish, despite the eradication campaign.

Although the practice of poisoning coyotes was ended in the 1970s, the US Government still kills about 80,000 coyotes every year in defense of the US’s livestock industry. Many suburbanites despise the coyote as the predator of Fido and Fluffy, but cars kill an estimated 6 million dogs and 26 million cats in the United States every year. While coyote kills of pets are very difficult to estimate, we do know that coyotes kill only about 2% of sheep and lambs in the USA (93,200 sheep and 156,000 lambs) annually. The coyote seems to get a disproportionate amount of hatred for the kills that it actually executes.

The time may have come to reconsider our coyote management strategy. How can humans learn to live with these predators? How can we use their adaptive personalities to keep them in the wild, rather than in our backyards? The best coyote management places the responsibility on humans to create an environment which excludes them from our pets and gardens. Some common sense measures that you can take include:

Next time you hear a coyote howl – be it in a prairie or a parking lot, consider the intricate ways that the coyote is tied to North American identity and the color that this American innovator adds to our landscape.

National Geographic: How the most Hated Animal in America Outwitted us All