Animals in winter: The Douglas Squirrel 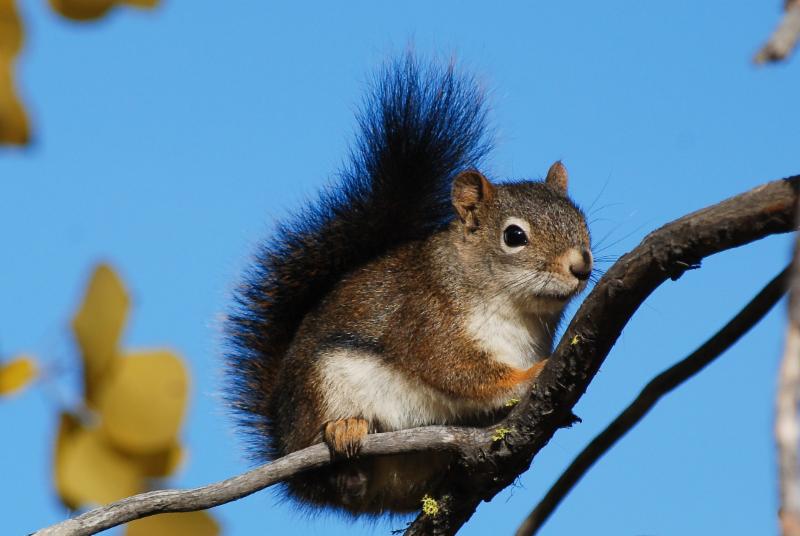 John Muir, founder of the Sierra Club and renowned 20th Century naturalist, famously said of the Douglas Squirrel, “He is the mocking-bird of squirrels, pouring forth mixed chatter and song like a perennial fountain; barking like a dog, screaming like a hawk, chirping like a blackbird or a sparrow; while in bluff, audacious noisiness he is a very jay.” (The Mountains of California, John Muir 1894).

Today, Muir’s sentiment still rings true. The native Douglas Squirrel is an animated character – loudly harassing a passerby and then disappearing into the brush. However, these noisy fellows have some interesting ways of making it through the winter that will charm the human observer.

Douglas squirrels can begin breeding as early as February and, once their mates are chosen, a pair of squirrels will ardently defend their nest and territory. Look for Douglas squirrels by identifying their tufted ears and their rust-orange bellies which can turn sandy-gray in the winter time.

For food, the Douglas squirrel relies on the seeds of coniferous trees like the Douglas Fir, Sitka Spruce, and Shore Pine. This means that they are often found in coniferous forests and can be threatened by loss of this habitat type. Squirrels collect and cache cones for the winter in a stash called a “midden”. You might also spot the torn-up remnants of conifer cones while walking through a forest. Take note and listen for the “mocking-bird of squirrels” – odds are, he’s not far off!

The Mountains of California by John Muir