Animals in Winter: The Long-toed Salamander 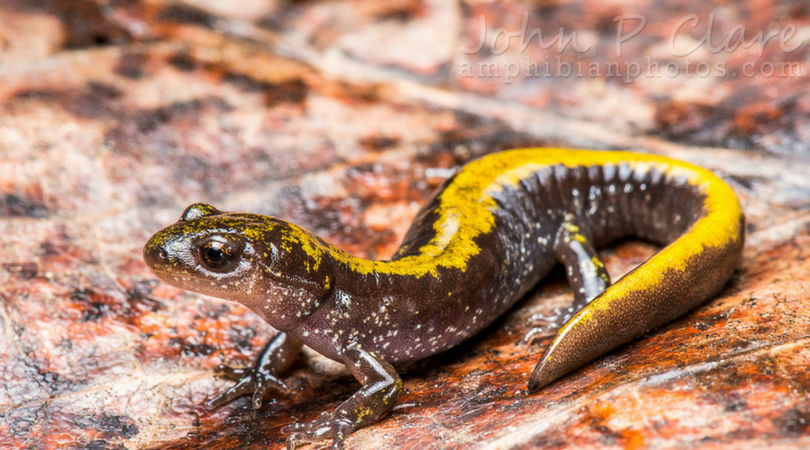 The Long-toed Salamander or Ambystoma macrodactylum, is one of the most ecologically versatile amphibians in the Pacific Northwest.  It occurs in wetlands, like ours, as well as temperate conifer forests, plains, and meadows.

Long-toed salamanders are one of the earliest amphibians to breed which is sometimes detrimental to the species in the event of sudden sub-freezing weather.  On the other hand, the tiny hatchlings can avoid being preyed on by the larvae of larger salamanders and insects which are not yet active.  A long-toed salamander will reach maturity at around two to three years and can live up to seven years.

These salamanders typically have a mottled brackish gray skin with a pinkish tone on its legs and undersides.  They display a long toe on their hind legs, hence, the name.  When threatened, a Long -toed salamander will wave its tail and secrete a milky-white, poisonous substance.  An adult may also drop part of its tail and slink away while the tail bit acts as a squirmy decoy.  The tail will then regenerate, a trait that is of great interest to the medical profession.  The color of their skin is an indicator to predators that if eaten he won’t be very tasty.  They are, however, preyed upon by garter snakes.

The diet of a long-toed salamander is primarily insects, tadpoles, worms, beetles and small fish.  They hibernate in the winter and survive on energy stored in their skin and tails.

Long toed salamander populations are threatened by fragmentation of habitat, introduced species, and UV radiation.  Forestry and land developments have altered environments and have increased mortality but some places are making efforts to sustain the ecology of the species.