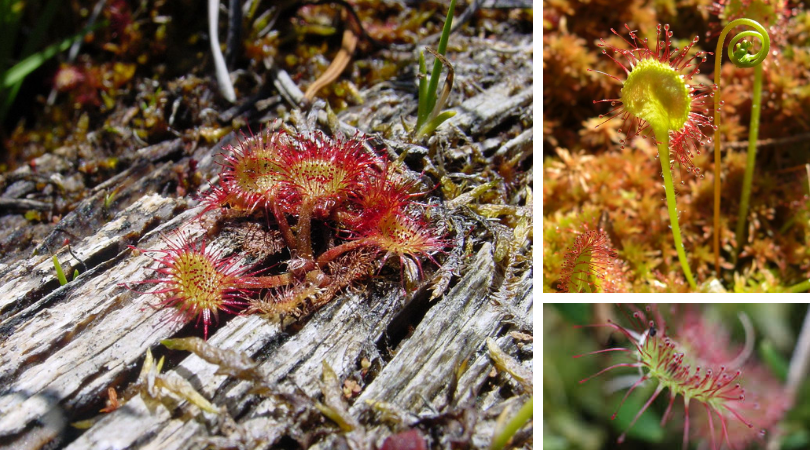 Roundleaf Sundew – Drosera rotundifolia
The roundleaf sundew (Drosera rotundifolia) is wonderful carnivorous wetland-loving plant species. Unlike most other plants, the sundew derives most of its nutrients from breaking down insects, instead of retrieving nutrients from the soil. Being carnivorous allows the roundleaf sundew to thrive in low nutrient environments such as bogs and fens.
The sundew’s leaves are specially adapted to trap and consume small insects such as small flies. First the sundew produces a sweet, sticky substance to lure in its insect prey. Insects get trapped on the sticky outer red tentacles on the leaves of the plant. Once an insect is stuck on the leaf, the tentacles wrap around the insect. The plant then produces a substance containing digestive enzymes to break down the insect so that it can be absorbed. This makes it a great contribution to pest control in the ecosystem.
This little, insect eating plant has white to pinkish flowers with reddish small hairs on the leaves. You can find the sundew blooming in June through September in bogs and other peat wetland environments. The roundleaf sundew is specially adapted to live in acidic and wet habitats just like habitats found at SHADOW Lake Nature Preserve.
Learn more:
Wildflowers of Adirondacks
Roundleaf Sundew