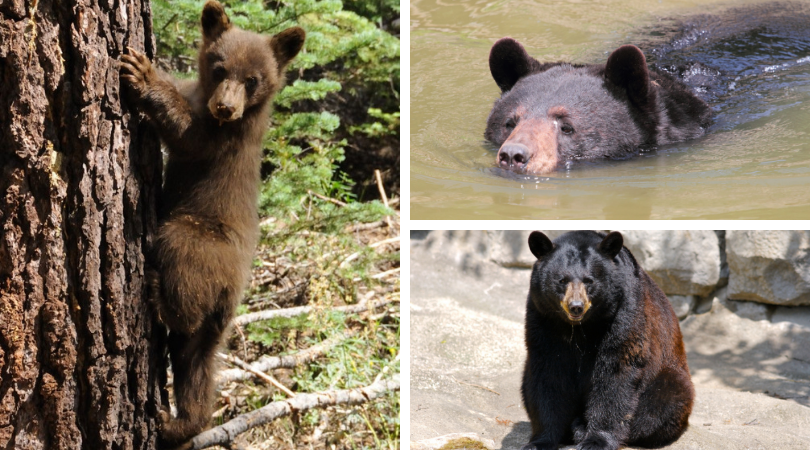 The Pacific Northwest isn’t home to alligators or giant deadly snakes, but a majestic predator found here is a bear. With long ears, dark eyes, short tail, black fur, black bears are the most familiar bear in North America. But how can you tell the difference between a black and grizzly bear? The initial most common difference is that black bears are smaller and darker. They have shorter ears, smaller shoulder humps, and shorter front claws. Females generally weigh less than 200 pounds and males can weigh over 600 pounds.

During winter, black bears hibernate in burrows, caves, or other shelter by using their body fat that they have scavenged during autumn and summer. Black bears like to roam large territories when they are awake but are not protective of their areas except mothers. A female bear gives birth to two or three cubs who are blind and nurses them from winter to spring. The babies will stay with their mom for a couple years.

These bears prefer areas where they can find abundant food, as they are opportunistic eaters feeding on berries, insects, grasses, fish, and mammals. This also means that they have grown accustomed to human food and garbage. Unfortunately, bears are often killed when they search for food in campsites and backyards, so make sure your food is safe when it is outside. Packing food in odor-proof bags and containers, hanging it out of reach from your kitchen, sleeping, and dining areas, and keeping a campsite clean can help keep them away. Bears are intelligent animals with good memories and some bears may have become accustomed to bear-hangs. If you ever see a bear, try to identify what type of bear it is and how to behave around it. This way you may be able to steer clear of a sticky situation. Make sure to do your research to avoid an unwanted encounter and do not feed bears!