Little Brown Bat – Myotis lucifugus
Although often considered pests, bats are essential species of ecosystems in the Pacific Northwest. The little brown bat Myotis lucifugus is the most commonly observed bat in Washington state. Next time you see a bat, look to see if it has dark brown glossy fur and wing membranes; it may be a little brown bat. Their wingspan ranges from 8-11 inches and they typically weigh only 0.2 to 0.5 ounces. Along with pollinating native plants, they also love to munch on mosquitoes, crane flies, and wasps. Because of its insect diet, the little brown bat has an affinity for water which is why many of them live here, at SHADOW.
Little brown bats typically have three different homes. They live in separate roosts for day, night, and during hibernation. These houses can be found in buildings, trees, under rocks, wood piles, mines, cliffs, boulders, and bridges. Bats choose their roosting trees based on a variety of factors such as tree height, width, openness (for young bats learning for fly), and number of crevices. Keep your eyes peeled for ideal bat hiding places in your neighborhood this month!
At night, bats stay warm by cuddling together. In colder climates, such as Washington, bats start hibernation as early as September and may not come out again until mid-May. In the Spring, little brown bats can be heard squeaking loudly and seen sleeping upside-down almost twenty hours a day. They use their energy right-side up for hunting at night.
Colonies of bats can be found in giant groups traveling together at dusk. The Myotis lucifugus use echolocation, which means that they locate prey, boundaries, and other bats using sound vibrations. They do this by making noises, waiting for the sound waves to bounce back off objects, and measuring the distance of various objects by how quickly the sound waves return to them. This allows them to fly safely, even in the dark.
Did you know that bats are the only mammal that can sustain flight? 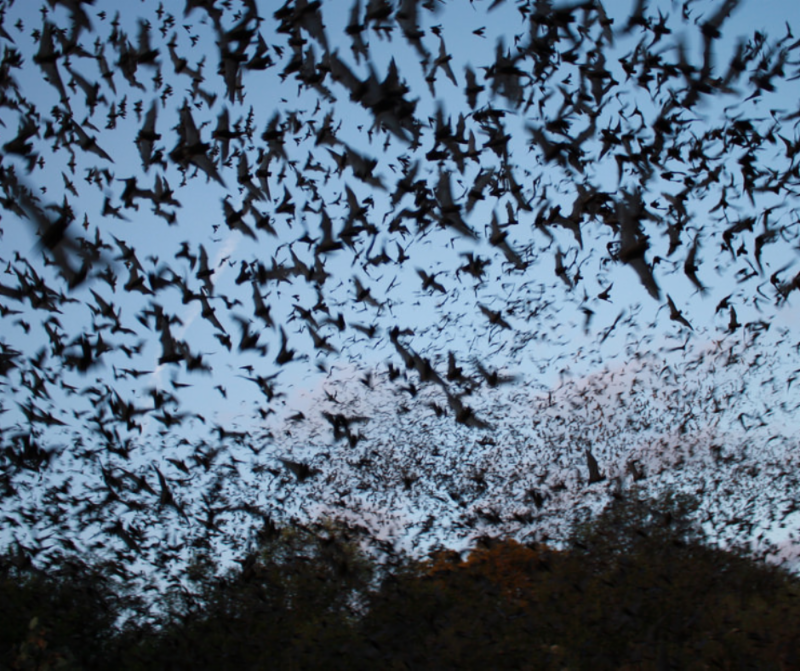 Brown bats live about six to seven years but have been recorded to live past ten or even twenty. Their predators include birds, rats, and snakes, but they are more often killed by accidents such as getting caught on barbed wire or drowning in floods during hibernation. A Washington state Conservation Plan, proposed in 2013, outlines the importance of decontamination protocols to reduce the potential for people to transmit white-nose syndrome, a disease that has killed millions of bats in North America. This plan also wants to minimize bat mortality by enhancing streams, rivers, and wetlands, particularly areas close to significant bat roosts.
Have you spotted an elusive bat around SHADOW Lake Nature Preserve? Let us know! We love to hear about new discoveries.
Want more Knowledge?
Bat Conservation Plan
PNW Bat Map Article
National Wildlife Federation: Little Brown Bat
By:
SHADOW Intern, Gabrielle (Gabi) Esparza