Photo curtesy of King County Noxious Weeds
Known by many as Stinky Bob or Herb Robert, Geranium Robertianum, is as invasive a weed as they come. This little plant has an incredible super power that helps it dominate wherever its seeds end up. Stinky Bob is a wild Geranium native to Europe, parts of Asia, and Africa and is thought to have been introduced in the US. In King County, this plant is a Class B noxious weed and should be removed (with the root) by landowners who encounter it on their property.
Before you remove Herb Robert make sure you are pulling the right plant- it slightly resembles our beloved, native Bleeding Heart. Herb Robert has widely branching red stems with white hairs, a 5 petaled pink flower, and a strong herby smell when touched. The many-branching stems can grow to be a foot tall and the roots are usually exposed and easy to pull up. Expert identifiers can pull this plant even at a juvenile stage, as its leaves become easier to identify and its stem is red even when only a few inches tall. 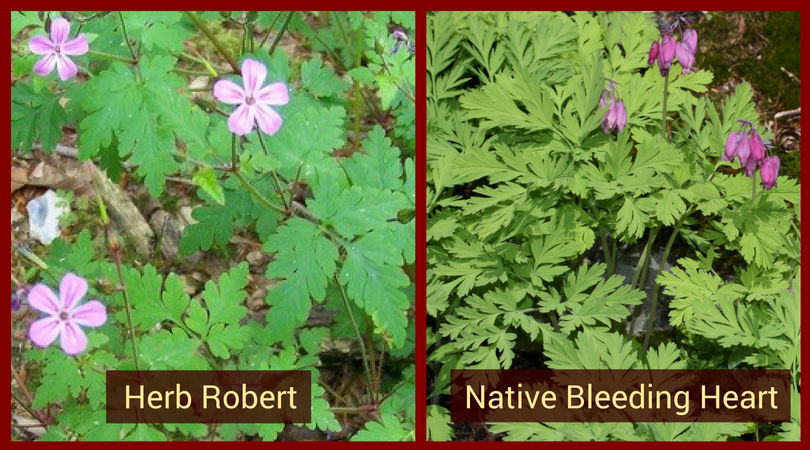 Herb Robert’s incredible survival super power is the ability to release allelopathic chemicals. Simply put, it releases toxins into the soil that kill other plants! It can literally kill the native plants growing in an area where it is introduced, creating a dense monoculture. It also has a bright, pinky-purple showy flower that attracts pollinators away from native species.
Luckily, this plant is in its flower stage in May so it is easy to find and remove at this time of year. The more we remove now, the less Herb Roberts will produce seeds for next year. While we must regret its spread into Western Washington forests, it is hard not to admire the tenacity and super powers of this powerful little species.

Be an Herb Roberts Expert:

Info from Finland about Herb Roberts as a Native Plant