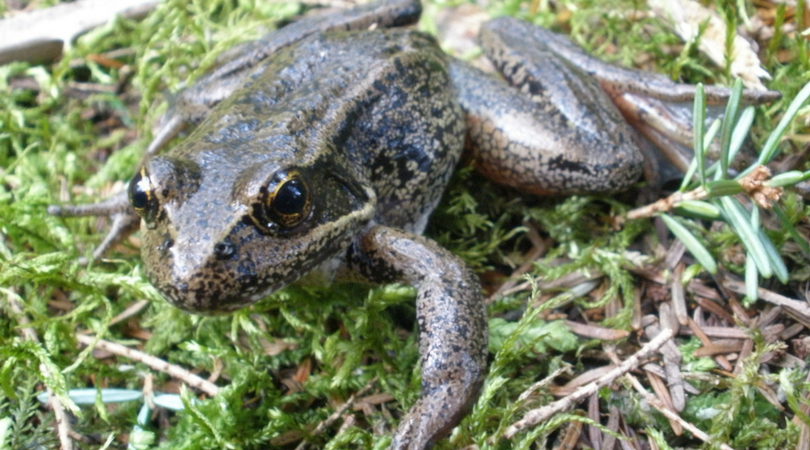 Similar to many of us in the Pacific Northwest, but unique to most amphibians, the red-legged frog prefers cool weather. The red-legged frog, or Rana aurora “dawn frog” in Latin, gets its name because of the distinctive red-tinged skin on the underside of its legs. 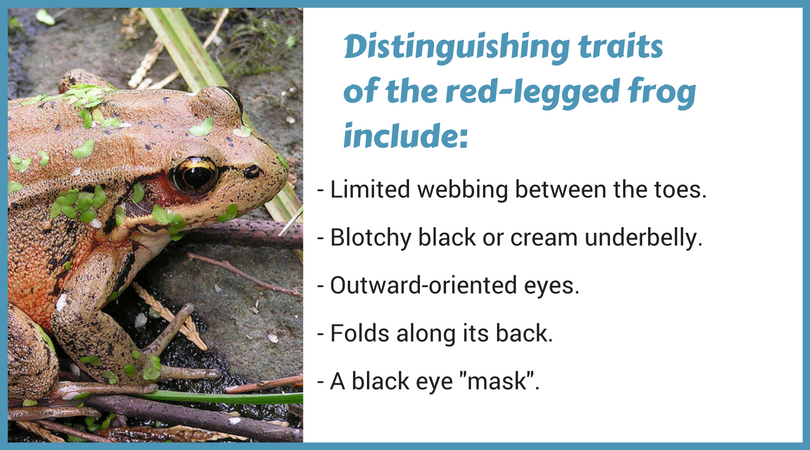 You can find these beauties in Washington, Oregon, California, and British Columbia. Like most amphibians, red-legged frogs are an indicator species. This means that they are one of the most sensitive species in our area and can act as an early warning of environmental conditions, such as climate change.

In the evenings (their most active time) these shy amphibians keep still and quiet. The red-legged frog will often call underwater as in the YouTube clip below. These are certainly not the loud bullfrogs and toads you may be used to hearing! Perhaps this careful behavior contributes to their long lifespans- as much as 15 years in the wild. Their secretive nature has prevented a full analysis of the red-legged frog’s diet, although we do know that they do consume insects while on land.

Despite these clever survival tactics, however, urban sprawl, climate change, and predator-prey imbalances indicate trouble for the red-legged frog. Human-introduced pesticides and herbicides poison them, not only by direct contact, but also through their food. Bullfrogs, exotic, warm-weather fish, and house pets pose a threat to larvae and mature frog populations, alike. While loss of suitable habitat threatens to leave these Pacific Northwest natives without a place to call home.

The conservation of natural systems, in which wetlands and ponds are boarded by at least a few hundred yards of healthy forest, is crucial to maintaining red-legged frog populations. You can fight back with SHADOW Lake Nature Preserve today when you make the Conservation Pledge to restore critical habitat.

Learning more about these timid amphibians will allow us to do more to help them survive. It will also provide us with insights about what our environment has in store. SHADOW partners with the Woodland Park Zoo and the Washington Department of Fish & Wildlife on a community science project to monitor amphibian populations here at the Nature Preserve. If you would like to get your feet wet hunting for frogs this spring, please contact us!