Native of the Month: American Robin 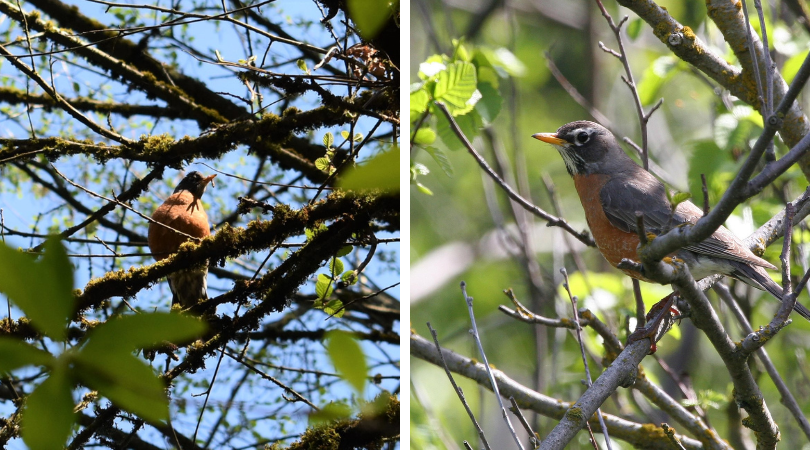 American Robin – Turdus migratoriusAmerican robins can be seen anywhere in North America and are often spotted running through lawns or perched in a tree. In the spring and summer, robin calls are a lovely sound to wake up to in the morning. As larger songbirds, robins can be easy to identify with their orange underbellies and dark gray back and tail. Their heads are black with white markings above and below their eyes. Robins are sexually dimorphic as demonstrated by the males being bigger and more vibrant.

Robin habitat is widespread from forests to arid deserts and farmlands to cities. They are very adept at finding a place to nestin dense shrubs or trees. During the winter, a roost can become as large as few hundred thousand birds. In the summer, females stay with the nest and the males gather to provide for the roost. The robin can produce up to three broods in one year; however, only about 25 percent of the young offspring survive through the fall. About half of the robins alive in a year will likely make it to the next. Robins can live very long lives, the oldest one recorded lived 13 years and 11 months!

As omnivores, robins eat different types of food. Insect larvae, earthworms, caterpillars, spiders, termites, crickets, mulberries, and beetles are only some of their diet. Because
robins forage largely upon lawns, they can become vulnerable to pesticide poisoning, so be careful portioning weed killers or fertilizers in your yard if you use them.