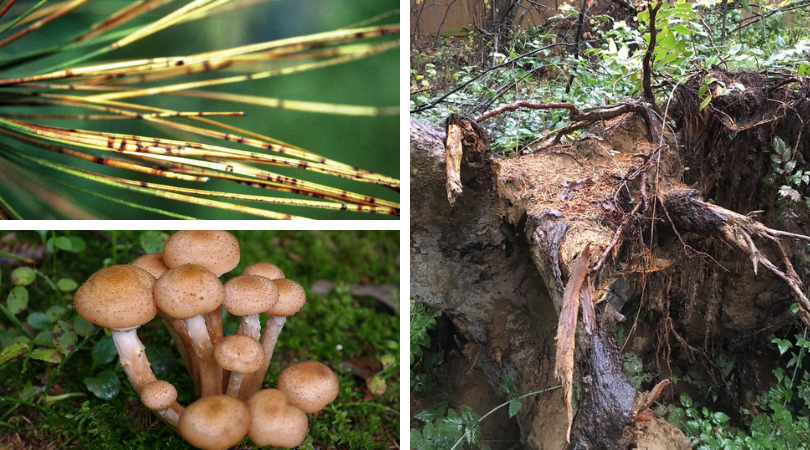 Known as the Evergreen State, Washington is replete with many different species of trees. There are also plenty of diseases that can harm them. The leaves, roots, or branches of various tree species can become infected with diseases that lead to wood decay, reduced growth, and even death. Below are some common diseases we find here in Washington State.

Dothistroma needle blight is caused by Dothistroma pini, a fungus that causes pines to defoliate prematurely. In the United States, needle blight affects 20 different pine species and can be detected by deep green bands on needles that fade and turn brown over time, as well as yellow spots. On the West Coast, these bands can be bright red which is why this disease is also known as the “red band” disease. It may take a year for the infected leaves to fall, but the tree will eventually die after successive years of infection. A lookalike disease is brown-spot needle blight, caused by the fungus Scirrhia acicola, and the two can only be distinguished under a microscope.

Diseases ailing tree roots include Armillaria root disease, black stain root disease, laminated root rot, and Schweinitzii root and butt rot. These diseases can be more difficult to diagnose as only the roots, which are underground, show infection. Armillaria root disease affects trees, shrubs, and herbaceous plants in a variety of ecosystems. To help identify Armillaria infection, two-inch—or five-centimeter—tall mushrooms with yellow or brown stalks grow near the base of the infected tree. The mushroom caps are honey yellow and the top of the cap can be sticky while the underside of the cap has white spires and gills. Another characteristic of Armillaria infection is bark with rot that appears white.

These diseases caused by parasitic fungi lead to reduced growth, wood decay, and even death. Most often, trees weakened by other factors or pests are the most susceptible to infection. When infected, conifers like Douglas firs produce unusually large cones (i.e. stress cones) and exude a lot of resin.

Dwarf mistletoe is another type of tree parasite, but rather than being fungi, they are plants. Hemlock dwarf mistletoe, for example, is a small flowering parasitic plant without leaves and aerial shoots. Although it only has one berry, during autumn when it’s ripe, it can explode with a velocity of 88 feet per second or 27 meters per second! In the spring, the seeds start germinating and growing around the branch, eventually penetrating the bark. When the infection starts, you will see a spindle-shaped swelling and, in a year or two, the mistletoe shoots will surface and interfere with tree growth and nutrient distribution.

Elytroderma needle cast, western gall rust, and white pine blister rust can also be found throughout Western Washington. Keep an eye out for uncharacteristic bark spots, leaf discoloration, deformed branches or cones, mushrooms on or at the base of the tree, or any other abnormalities. If you find these tree characteristics on your property, consult with a professional arborist to discuss best practices for removal. Biodiverse ecosystems lower trees’ risk for infection, so we at SHADOW help to restore balance to habitats.