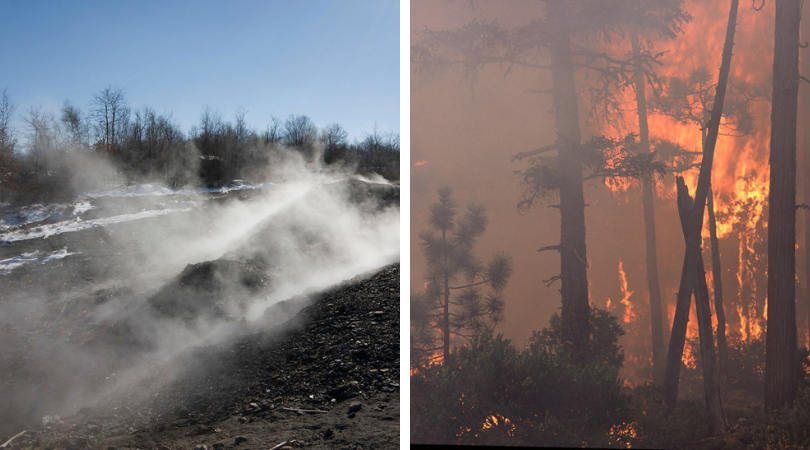 Peatlands, like the Shadow Lake Bog, are the most carbon-dense ecosystems on the planet. Peat bogs not only store carbon from thousands of years of decomposing organic matter, but absorb carbon dioxide (CO2), including carbonproduced by human activity. Climate change poses a great threat to peatlands, particularly when it comes to wildfires. Increased human development and fossil fuel emissions accelerate the drying of wetlands and these intricate ecosystems are not resistant to fire. The potential threats of peatland wildfires have been overlooked in the past, but recent studies allow us to better understand the consequences of peatland wildfires and build a framework for better fire management activity.

Research has found that decades of continued fire suppression has caused hidden consequences. Fire suppression coupled with climate change has caused the number of large fires in the Western United States to double since the 1980s. Scientists are now recognizing that wildfires impact the release of carbon from peatlands. The risk of peat fire is determined by the type and depth of a peat deposit, geological structure beneath it, and presence of trees on its surface. All of this, is influenced by rain, wind, and temperature, also referred to as fire weather. As fire weather conditions escalate, peat deposits pose complex threats that magnify the risk of severe, long-lasting fires and heavy smoke. Since the carbon stored in peatlands exceeds that of any other vegetation type, the burning of peatlands poses a significant threat to reducing carbon output into the atmosphere.

As forest fires spread into drying peatlands, the peat can catch fire and begin to burn. When fires smolder deep underground, they have been reported to continue smoking for over a year and release massive amounts of carbon. For example, fires in an Indonesian peat swamp in 2015 emitted millions of tons of CO2, more than the daily carbon emissions from the entire US economy. New models are being created to help predict the depth at which peat will burn and the impact peatland fires will have on global carbon emissions. Now that scientists are becoming more aware of the role peatlands play in the carbon cycle, further research is needed to find solutions to the growing wildfire activity.