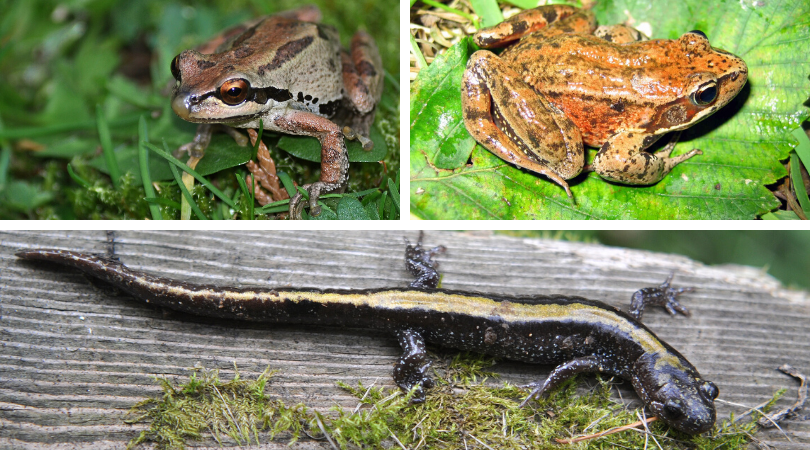 It is no secret that here at SHADOW Lake Nature Preserve we love wildlife, including our amphibian friends. As both predators and prey, amphibians are critical to their habits which is one of the many reasons why we love seeing them around the Nature Preserve. Another reason to appreciate frogs, toads, salamanders, newts, and caecilians are their ability to reduce unwanted insect populations through their insect rich diets. Amphibians also have the potential contribute to medical advances for humans. Researchers believe that a large tropical frog family, Bufonidae, may be harboring dozens of undiscovered chemical compounds with medicinal value. However, due to declining frog populations, these frog species may go extinct before researchers can discover their potential for medical applications.
Alarmingly, 32% of the world’s amphibians are threatened or endangered. Habitat destruction, disease, and invasive animals are three major contributors to the declines of these wonderful species. In the United States, it is estimated that native amphibian populations are reduced by over 3.5% per year which means that in 20 years with no changes in conservation efforts, some species will disappear from habitats completely. Can you imagine what our local habitats would look like without amphibians?

At SHADOW, we support amphibian populations through habitat preservation, community education, and beneficial
partnerships with organizations like the Woodland Park Zoo (WPZ). SHADOW preserves over 109 acres of habitat that include wetlands valuable to amphibian survival. Our restored Amphibian Pond, located at the start of the Boardwalk Trail, is a suitable breeding location for our amphibian friends. SHADOW has also been a partner with the WPZ’s Amphibian Monitoring Program since 2017. The WPZ Amphibian Monitoring program utilizes community volunteers to help collect data on local amphibian populations in Western Washington.
SHADOW has been able to document amphibian species at the Nature Preserve through the WPZ Amphibian Monitoring. Monitoring volunteers have observed a variety of species at SHADOW including the northern red-legged frog, pacific tree frogs, and long-toed salamander. Thankfully, our monitoring volunteers have not observed the invasive American bullfrog during surveys. Bullfrogs are known to outcompete native amphibian species and are excellent predators that can consume large quantities of many different indigenous species.
If you love amphibians as much as we do, you can help with conservation efforts too! You can help by educating others, not polluting, creating healthy amphibian habitat, conserving water, and supporting amphibian conservation organizations and programs.