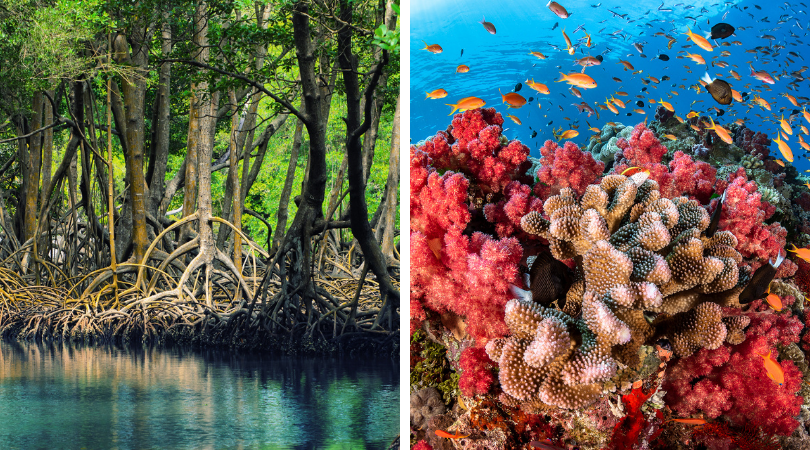 Coastal habitats like marshes, coral reefs, and mangroves are threatened by urbanization and development. These habitats when intact provide not only recreation, but also fish production, protection from storms, intrinsic cultural values, and other ecosystem services. With the rise of the sea level in upcoming years, millions of people will suffer from flooding and property damage and these coastal habitats have a potential to be not only the most effective protection also the least costly.

In this study supported by SNAPP (Science for the Nature and People Partnership), scientists evaluated the potential of coastal habitat potential by analyzing its effectiveness for wave reduction and comparing costs of structures that will provide the same amount of protection. They analyzed 69 field measurements of coastal wave reduction, 52 nature-based defense projects (restoration projects that include coastal protection as an objective), and engineering parameters on wave reduction effectiveness.

On average, habitats reduce wave heights between 35% and 71%! On the highest end of the spectrum, the ecosystem that provided the most protection from waves was the salt-marshes and coral reefs. Coral reefs have the most potential for protection because of the intensity of waves they endure, but their restoration costs are generally higher and more variable than other habitats. Although mangroves and kelp beds are only have as effective, they still provide adequate savings from property damage during storms, reduction in erosion, and costs of engineering and building human-made structures. Submerged breakwaters (barriers built out into the water to reduce waves) can be three to five times more expensive than mangrove restoration projects depending on the water depth. Nature created the best protection from flooding and storms! Overall, restoration efforts for coastal habitats are cost-effective and should be considered when planners are deciding on flood and storm management.