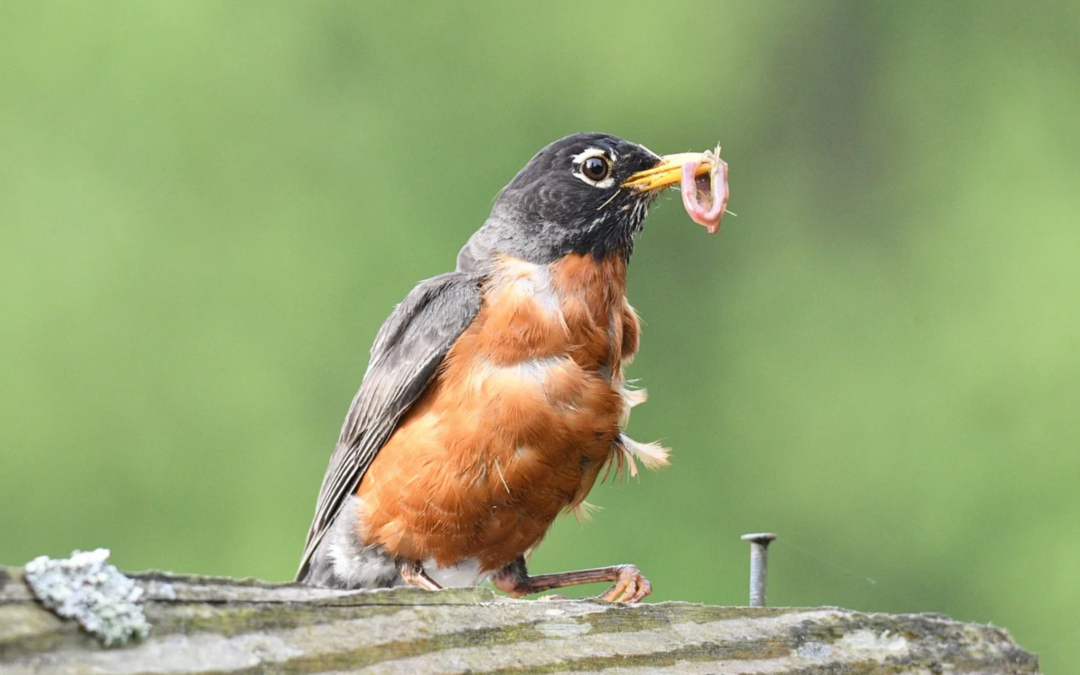 To the observant eye, the natural world around us sends many harbingers of spring: the days are getting longer, buds are beginning to swell and break on deciduous trees and shrubs, and here at SHADOW the frogs are singing their three-chambered hearts out. A very well-known sign of spring here in the United States is the arrival of the American robin (Turdus migratorius), a North American songbird whose scientific name sets the stage for this article.

Migration is the relatively long-distance, most often cyclical, movement of individuals in response to changing environmental conditions. These changes can be linked to food availability, mating behavior, adverse living conditions, or combinations of all three. Animals often migrate annually, tracking changes in seasons, such as when our friend the American robin returns to Washington each spring. Other animals migrate diurnally, such as jellyfish moving vertically in the water column with the daylight and crabs moving horizontally with tidal fluctuations.

We are lucky to have some iconic examples of migration to view in our own backyard: the spawning of Chinook, coho, and sockeye salmon; orcas and several whale species, and the epic journey of monarch butterflies. Our local salmon species are anadromous, meaning they live in both fresh and saltwater environments at different stages of their lives. Their eggs hatch in streams and rivers, and juveniles migrate downstream to the ocean, perhaps spending several years in rivers. Adults return to spawn where they were born, in most cases dying after spawning. The spectacular annual migration of monarchs is a multigenerational journey from south to north and back in which no individual who begins survives to the finish!

For many species, migration is driven by the need to find food. Many species of North American birds will overwinter in Central and South America. Some of these species have populations that only live in the tropical regions where the northern populations overwinter, but the reason they don’t stay has to do with food availability, especially during the breeding season. During the long days of the summer months in the Northern Hemisphere, there is a greater opportunity to provide food to a clutch of hungry hatchlings. Research has shown that, on average, migrating populations have larger broods than those who stay put.
Why don’t all birds migrate? There are trade-offs to all behaviors. Migration carries a high risk of mortality relative to staying in one place year-round. Predation, exhaustion, and disease transmission in the large flocks traveling together are all examples of risks faced by birds traveling hundreds to thousands of miles every year.

﻿Migration is just one solution to the challenge of surviving seasonal changes in weather. Alternative strategies include hibernating or persistence. Hibernation is a state of reduced metabolic activity that lasts for a period when food is unavailable. Bears are synonymous with hibernation, but many animals hunker down for the winter, including reptiles and amphibians such as snakes, turtles, and frogs; small mammals such as chipmunks and skunks; and insects such as ladybugs and bumblebees. Familiar examples of critters who have adapted by way of the “stick it out” method include squirrels, raccoons, coyotes, and opossums, local populations of bald eagles, and many of the common birds found at feeders, mixed in with migrating species, during the winter.