Native of the Month: Bats 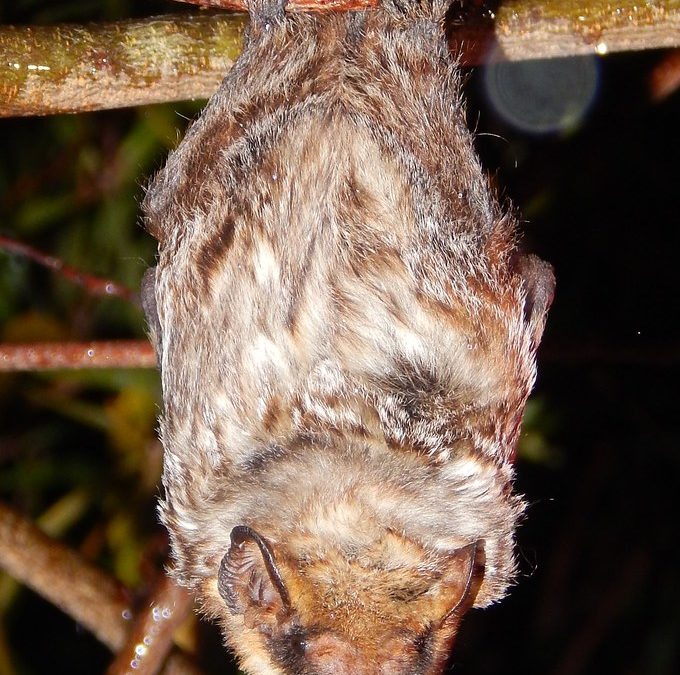 Bats, order Chiroptera, are the second most diverse order of mammals on the planet, outnumbered only by rodents. Bats occur worldwide, except Antarctica, and they display an astonishing range in size. The largest species is the giant golden-crowned flying fox, native to the Philippines, with a wingspan of over five feet (1.5 m) and weighing up to 2.4 lbs (1 kg). At the other end of the range is the tiny Kitti’s hog-nosed bat, native to Thailand and Myanmar, which is smaller than your thumb at just over one inch long and weighs only 0.07 ounces, less than the mass of a penny. That is a 550-fold difference in mass! These different sizes form two groups, megachiroptera (the large fruit bats) and Microchiroptera (the small bats). Bats are the only true flying mammal, as opposed to flying squirrels who only glide short distances.

Bats fill a wide variety of dietary niches, including fruit, nectar, fish, bugs, and yes, blood. Contrary to popular belief, bats are not blind and can see quite well. The well-known trait of echolocation, the use of hearing echos of the bat’s high frequency chirps for tracking prey, is common to all bats expect the fruit-eating flying foxes. The foraging behaviors of different bats help to disperse seeds of fruit-bearing trees, pollinate flowers such as the agave (source of tequila), and save the agriculture industry millions of dollars through their nightly insect consumption.

Washington State is home to 15 species of bats, 11 of which are found in Eastern Washington. One of these species is the hoary bat (Lasiurus cinereus). At 5-6 inches (12.7 – 15.2 cm) long and sporting a 15-inch (38-cenimeter) wingspan, the hoary bat is the largest species in Washington. The name “hoary” refers to the grayish-white tips of the fur found on the bat’s torso from head to tail membrane. Being mostly solitary, they wrap themselves up into a little furry sleeping bag with that tail on cold days, and roost in trees where they pass for a dead leaf hanging down. When it is time to hunt, the hoary bat prefers to eat moths and beetles, but also eat mosquitoes when they are in abundance on warm summer evenings.

Hoary bats are most threatened by habitat loss and wind farms. As a migrating species of bat, they travel 1000’s of miles every year. During these migrations, they collide with wind turbines, killing approximately 76,000 – 152,000 annually according to Bat Conservation International. Scientists and wind farm developers are working together to find out how to prevent these deadly impacts. Habitat loss can be mitigated by allowing large tree stands to remain and utilizing small bat boxes in areas with few trees.

Follow the links below to learn more about hoary bats and other bat species found in our area, and what you can do to help support these amazing and important creatures:

Living with and reporting found bats

By: Jennifer Tallman from the Wood Park Zoo