Native of the Month: Rabbits 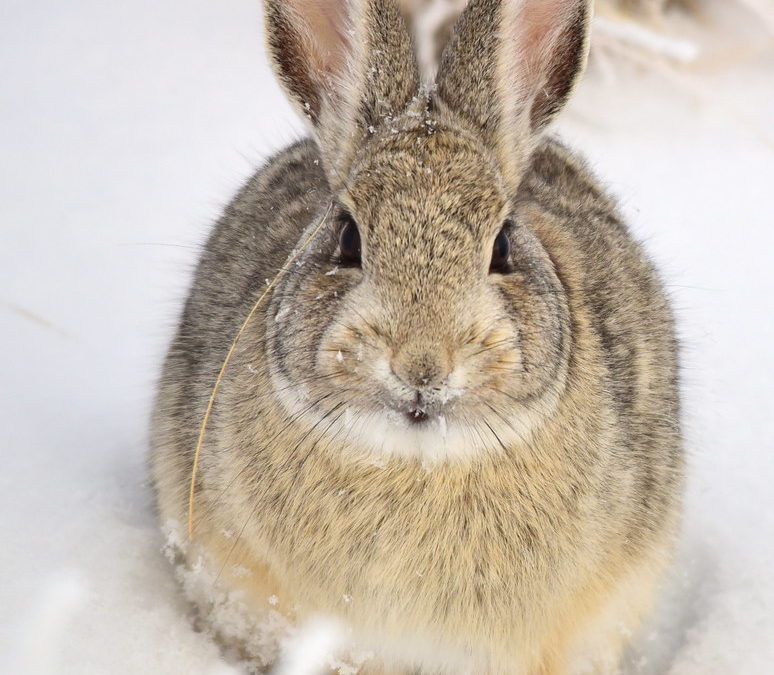 You may have heard that 2023 is the Year of the Rabbit. Like the other members of the Chinese zodiac, the Year of the Rabbit comes once every 12 years. In Chinese culture, the rabbit waits for the ideal moment and leaps into action, and is considered quite lucky, bringing a prosperous, calm year ahead. We can likely all benefit from that kind of character in the new year!

There are two species of rabbit native to Eastern and Central Washington, Nuttall’s Cottontail (Sylvilagus nutallii) and the endangered Columbia Basin Pygmy Rabbit (Brachylagus idahoensis). But interestingly, there are no rabbits native to the Puget Sound area. The small, brown rabbits we see hopping about on the West Side are Eastern Cottontails (Sylvilagus floridanus), that were introduced to several areas of Washington as a game animal beginning in the 1930s, native to the eastern United States and Central America. Cottontails have chunky, reddish- or greyish- brown fur, with large hind feet, long ears, a fluffy white tail, and white belly. As far as rabbits go, they are medium-sized, about 14 – 19 in (36 – 48 cm) long and weigh an average of 2 to 4.5 lb (1 – 2 kg). The smallest rabbits in the world are Washington’s own Columbia Basin Pygmy Rabbits, weighing just about 16 oz (0.4 kg) at maturity, while the largest rabbits in the world are domestic Flemish Giants, which can weigh up to 49 lb (20 kg)!

Rabbits are often thought to be rodents but they are Lagomorphs, in the same family as hares, pikas, and chinchillas. While rodents have two incisors on the upper jaw and are omnivorous, many eat some meat and plant matter, lagomorphs have four incisors and are strictly herbivorous. Rabbits are browsers, eating small material like twigs, buds, and bark of shrubs and trees in the dormant season, but they prefer tender green vegetation, including grasses, clovers, plantain, chickweed, and dandelion, but over one hundred local plant species are known to be eaten by cottontails. What separates hares from rabbits? Washington is home to three species of hares, and it is the length of their ears, as well as the size of their feet that separate them from rabbits.

Cottontails prefer to forage in an open area with good visibility, but where there is ample cover to hide quickly when predators are near. They are crepuscular which means that they are most active at dawn and dusk, but they also feed at night, preferring to use daylight hours for resting under cover. They are equally at home near forests, swamps, thickets, or grasslands, all of which are found at SHADOW and they will use abandoned burrows made by other animals. They make their nest in a form, a shallow bowl-shaped depression in a clump or grass or under a bush. The mother then lines the nest with grass and fur that she plucks from her belly. The babies, called kits, are born pink and naked, with their eyes closed. They are ready to leave the nest at 3-5 weeks old.

Hawks, owls, coyotes, bobcats, and foxes prey upon adult rabbits and cats prey upon young rabbits in the nest. Female rabbits are larger than the males, and are capable of incredible reproductive rates. Starting at 2-3 months of age, each female averages 3-4 litters per year, with an average of 5 kits per litter. That’s an average of 15-20 baby rabbits per female per year. It doesn’t take long for the population to explode! Unfortunately, domestic rabbits, especially those given as gifts at Easter, are often set free as well, and most don’t fare well in the wild. Most domestic breeds of rabbits have lost not only their immunity to disease, but also their ability to forage for food, hide and deceive predators, and are soon easy prey. Although domestic rabbits can breed with wild Cottontails, remember that pet bunnies deserve to be cared for as pets, not left to chance in the wild.