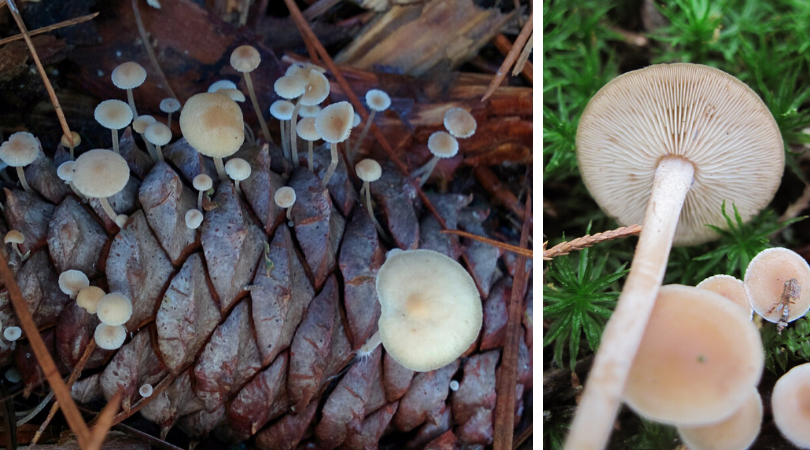 Conifercone Cap – Baeospora myosura
Mushrooms are not plants, but we wanted to feature one of numerous special fungi found at SHADOW. The conifercone cap, or Baeospora myosura, grows widely across North America. They produce coarse, long hairs. Their gills are crowded, white, and sometimes have brown spots. The name Baeospora myosura is a mix of Greek and Latin entomologies. ‘Baeo’ means little and ‘spora’: spore. ‘Mysorua’ in Latin translates to ‘mouse tail’ due to the curved stems of these mushrooms that are usually 0.5 – 2 inches long. They have no distinguishable smell or taste.

Although plenty species of fungus are generalists; that is, they can live and find food in a wide niche, the conifercone cap is a specialist. Its unique habitat often resides inside of a pinecone. To lower competition, this species has evolved to break down conifer cones for carbohydrates. Interestingly, the ability to live in a pinecone allows the mushroom to spend less energy to defending its food and more into reproduction. Their favorite cones are those of the Douglas-fir and Sitka Spruce. Strobilurus, a conifercone look alike, also live in cones, but under a microscope, Strobilurus have larger spores. Keep an eye out for these robust fungus on the forest floor!