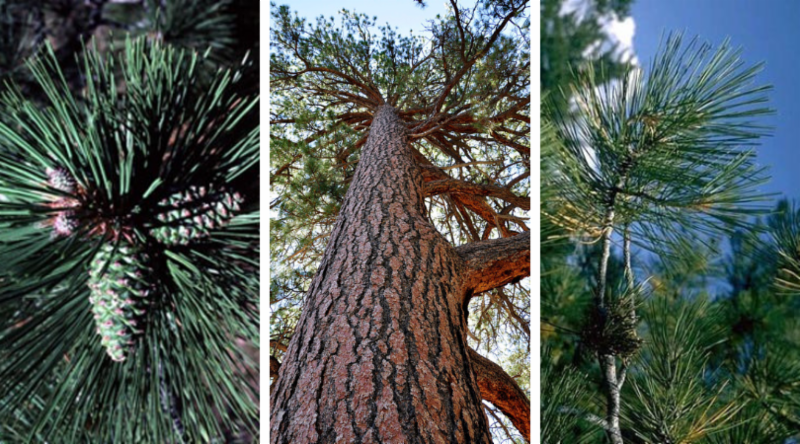 You probably recognize this tree, or one similar, if you have traveled anywhere in North America. The Pinus ponderosa has five subspecies native to different climates such as Colorado (southwestern ponderosa), northern Nebraska (central High Plains ponderosa), or California (Pacific ponderosa). This is because it is the most widely spread pine species in the whole continent. Named for its weighty wood, “ponderosa” stems from the Latin word “ponderosus” which means heavy. It also has many look-alikes such as the pond pine, longleaf pine, or scrub pine, but the ponderosa pine can be recognized by its sunset bark (yellow or red-orange) with black furrows and its long green needles.

The ponderosa native to Washington has the most flexible and longest needles among the ponderosa species which have been steeped for tea. They are generally dark green, olive, or yellow green and often come sets of three. The brownish-red or tan pine cones of ponderosas have prickly tips. Extremely well-adapted and useful, ponderosas are highly resistant to drought, wind, and wildfires. Their deep roots make them difficult to push over and their thick word keeps fire from penetrating. The inner bark can be used as medicine. Some people are more sensitive to ponderosas dominance of terpenes (chemical compounds found in plant essential oils) and say that they smell like turpentine, but it may not help you identify it because some smell a sweet aroma or no distinct odor.

Look out for different species of ponderosa if you travel to see if you can identify them. They also go by bull pine, blackjack pine, and western yellow-pine. Sometimes a familiar face (or plant) can make you feel more at home!