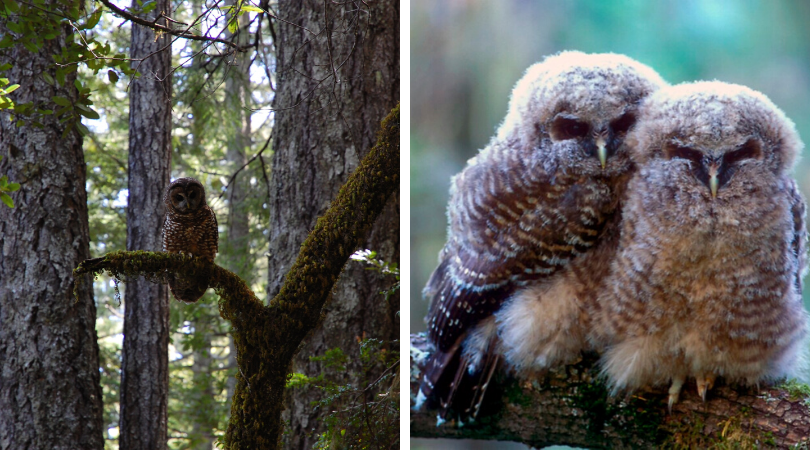 While looking up into a tree, it’s nice to imagine that squirrels or birds call it their home, but where do animals truly nest? Individuals from Washington, Oregon, and even northern California have reported northern spotted owl (NSO) nest sightings in old-growth forests. A study about northern spotted owls shed some light on these mysterious creatures. The northern spotted owl is listened as threatened in the U.S, which means that it is likely to become an endangered species soon. Because NSOs live in late-successional forests, their habitat loss has caused their population to decline.

In a study by Randall Wilk, Damon Lesmeister, and Eric Forsman, they tagged NSOs in various locations across Washington and Oregon. The researchers collected and analyzed data to determine which trees are more popular for nesting. Of about 1700 nest trees, they found that approximately 60% of nests are in broken tops of hollow trees, 30% in hollow trees that were accessed by holes in the side of a trunk, 22% in external platforms constructed by wildlife. Most of the owl nests, almost 90%, were found in Pseudotsuga menziesii (Douglas fir). The next most populated were Thuja plicata (western red cedar), and Tsuga heterophylla (western hemlock). In the Olympia Peninsula, dead tree nests were the most common. Overall, large dead trees are important for nesting sites.

Even though it is tragic when a tree dies due to infection, many of the platform nests have dwarf mistletoe infections. These infections allow space for wildlife to roost, forage, and nest, but are less common in coastal mountain ranges. Although a dead tree may not be as exciting to look at as an alive one, they provide habitat for a long time after their death. Another factor of owl nests is precipitation. Top and side tree cavities were larger in areas where annual rainfall was highest. This study confirmed that northern spotted owls need large stable cavities or platforms to nest. Old-growth forests are found mainly on federal lands of National Parks because land managers do find it difficult to retain these forests amid climate change and increasing human population. But if you see a Douglas fir with intact or declining crowns in an old-growth forest, it is possible there is a northern spotted owl nest hiding in there!