What makes a plant “native”? 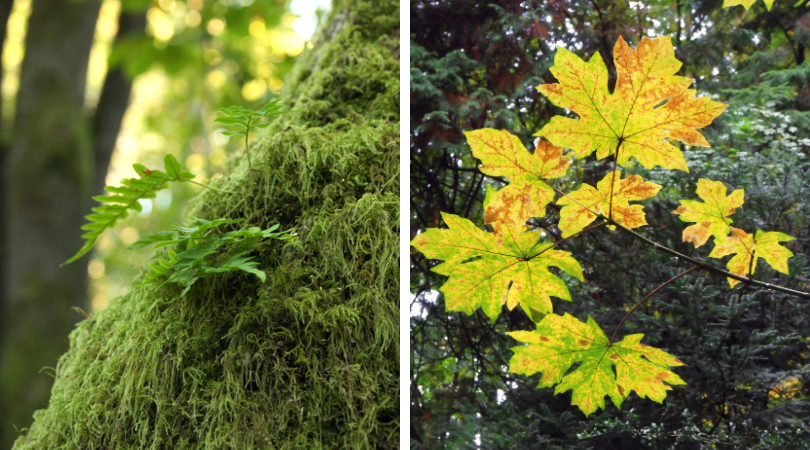 Gardeners, horticulturists, botanists, nature lovers have different definitions of which plants are considered native, invasive, and noxious, but there exist some general conclusions about which flora belong where. One aspect of a native plant is that it occupies an ecosystem for an extensive interval of time in the geological history of Earth. It has time to develop complex interactions with other plants in the area. Although the specific amount of geological time is unclear (it could be hundreds or thousands of years), we can still observe the connections that a plant has made and decide if their role makes them a native plant.

Native organisms benefit from mutualistic relationships. Licorice fern (Polypodium glycyrrhiza), for example, grows with moss on big leaf maples in the winter. This is because when maples lose their leaves, Polypodium glycyrrhiza climb the tall maples and take advantage of the sunlight in the open canopy. In addition, the moss on the trees acts as a sponge to keep licorice ferns moist! Each plant plays a role in maintaining natural balance.
We can also look at the indigenous groups
of people who stewarded the land before colonization. In King County, the Puget Sound Salish, which include the Duwamish, Muckleshoot, Snoqualmie, Puyallup, and many other surrounding tribes, use Lushootseed as a modern language created from a combination of different historic native tongues. In western Washington, we know that the Western red cedar, salmonberry, and Sitka spruce are native plants because tribes have lived in harmony with them and have given them traditional names:

Some plants that have not been in a region for a significant amount of time, but do not necessarily pose an immediate threat to native species. For example, common foxglove is an invasive and toxic plant. Although it was introduced by people, it is not a high species of concern for eradication and lives in the Pacific Northwest without maintenance by humans. There are plants that have been accidentally or intentionally transported from other ecosystems who do not belong. Because humans travel long distances compared other animals, they are often vectors for foreign weeds that do not have these relationships. Noxious weeds, like Himalayan blackberries, don’t have positive relationships with Pacific Northwest plant communities and aggressively outcompete native plants and prevent them from establishing. Dense blackberry thickets shade understory plants and provide low quality habitat for animals. Noxious weeds are also classified as those that may be harmful to agricultural activities and livestock. What does a native plant mean to you? Discussion about these definitions pull us closer to understanding the ancestry of our land and its connections.